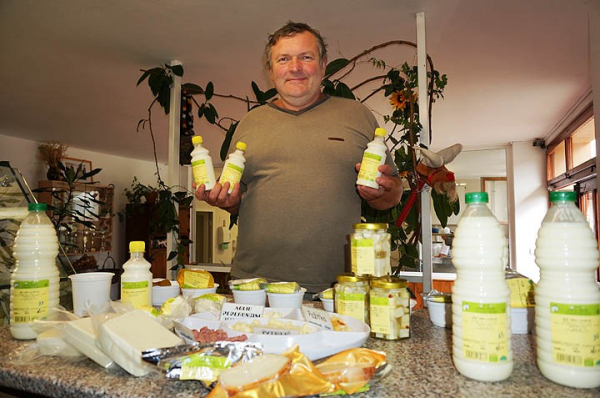 Contact A great place for a day out and an enchanting organic goat farm in the foothills of the Jizera Mountains.

Tours of the glass production plant and of the farm by appointment only: call +420 483 368 468. A combined tour of the glass-making and agricultural production areas with a guide and a tasting of the farm’s own organic products awaits you.

Česká republika
Pěnčín 60, 468 21 Pěnčín
Map location might not be exact

Pěnčín Goat Farm produces fresh and ripened goat and sheep cheeses and dairy products in organic quality, as well as sausages. The farm was established in 1998 as part of what would later become a tourist centre in the village of Pěnčín. Reconstruction work on the former agricultural cooperative complex began in 2002 and it now serves the general public as a presentation of life in a village in the Jablonec and Turnov regions during the second half of the 19th century. Visit the craft workshop here and make some jewellery from hand-pressed glass beads. The farm also offers tours of the surrounding area in a little “train”. Josef Pulíček's family farm is based on having a relationship to and a love for animals and traditional values ​​in the region and very soon became a popular place, particularly for lovers of goat’s cheese and goat’s milk products. Production can be seen and excellent organic products tasted and bought on the premises. The farm holds the highest awards in the region and at a national level. You can see herds of the goats bred here, sheep, geese, rabbits and other farm animals.