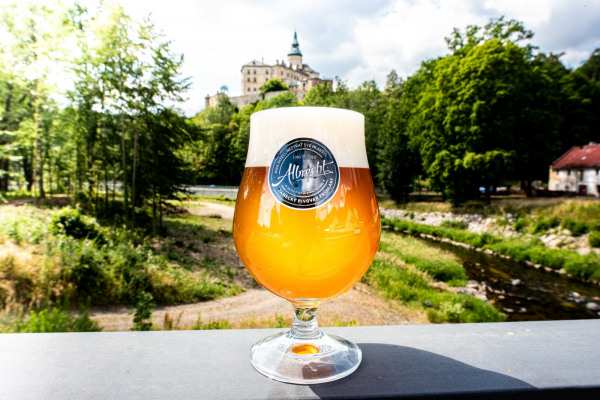 Contact Learn about the restored Chateau Brewery in Frýdlant and savour some Albrecht beer.

You can book a tour by e-mail at ic@pivovar-frydlant.com, by phone on 487 989 000 or in person at the reception of Chateau Brewery Frýdlant. Dates of regular tours (without the need for advance bookings) can be found at the brewery website.

Aristocratic beer production in Frýdlant in the north of the Liberec region was first documented in 1381, with the beer evidently brewed in the castle itself. A new brewery was then built near the River Smědá on the site where today's operations are located in the 16th century under the reign of the Redern family. The brewery was substantially expanded and rebuilt before 1629, such reconstruction evidently initiated by the lord of the Frýdlant estate at that time, Albrecht of Wallenstein, after whom the local beer is now named.

Beer production at the Frýdlant brewery ended shortly after the Second World War and the building was subsequently used for storing vegetables or maturing cheeses. The premises deteriorated during that time.

Then, in 2010, the dilapidated Chateau Brewery in Frýdlant was bought by Marek Vávra (Terra Felix s.r.o.). When restoring the brewery, Vávra wanted to preserve its historical appearance and began to cooperate with the National Heritage Institute to achieve this. He reconstructed the brewery and provided it with the equipment necessary for beer production. The brewery is also home to a pub, where you can sample Albrecht beers on tap or buy them in bottles to take home with you. Visitors can also take a tour of the brewery and taste the beer right from the lager tanks.