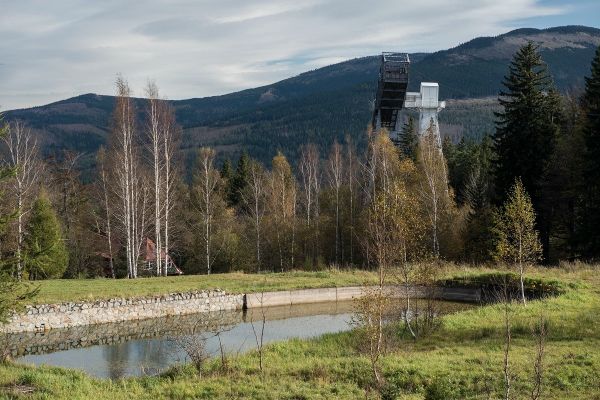 The Main Sudety Trail at ul. Olimpijska in Karpacz
https://www.karpacz.pl/historia-karkonoskiej-skoczni/article

Skocznia Narciarska Orlinek - Orlinek Ski Jumping Hill (K-85). The Main Sudety Trail. Already at the turn of the nineteenth century, the first ski jumping hills were made of snow in Karpacz. Ski jumpers were able to reach distances of twenty or so meters.
In 1912, near the present Orlinek Hotel, the first wooden ski jumping hill was erected, on which in 1914 a record jumping distance of 38.5 m was achieved. In 1932, it was upgraded, and the critical point went up to 45m.
After World War II the facility was demolished because of its poor technical condition. Already in 1946, the first construction works started on a new wooden jumping hill under the supervision of the famous skier Stanislaw Marusarz. Interestingly, the structure was built according to his instructions without any plans and technical documentation. Marusarz once revealed that the jump was built: ‘...from my memory and experience gained on hills all over the world’.
However, the wooden structure of Orlinek could not resist the strong winds of the Karkonosze Mountains, and in the 1970s it was decided to erect a new, steel structure. In 1979, a new Stanislaw Marusarz ski jumping hill opened.
In 2000, the Orlinek Ski Jumping Hill was rebuilt again in preparation for the World Junior Championships. The hill is FIS approved. The hill’s record belongs to Adam Malysz, who set it during the  Polish Senior Championships in 2004.