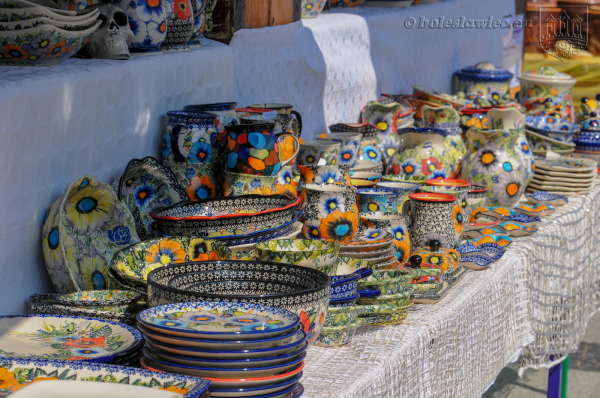 Boleslawiec-City of Ceramics, boasts numerous factories, galleries and shops with hand-painted ceramics valued all over the world. Every year, a Ceramics Festival is held in Bolesławiec, where everyone can actively participate in the creation of ceramic products: turning ceramic ware on a potter’s wheel, working in clay, painting ceramics under the supervision of masters of pottery, and admiring the works of artists from all over the world who participate in the International Ceramic and Sculpture Plein-Air. Local companies are open to the public who can observe the production process of ceramics. The beautiful and very distinctive Bolesławiec ceramic style boasts a very rich history that goes back to the Middle Ages. In the 12th century, deposits of ceramic clay were discovered in the Bóbr and Kwisa catchment areas near Bolesławiec. It was from it that great dishes were made, which gained great popularity not only domestically, but also abroad. German and Bohemian merchants quickly recognized the high quality of the products, and over time, this porcelain was also exported to other European countries. The oldest pottery plant in Bolesławiec operated from the sixteenth to mid-seventeenth century, creating beautiful dishes, figurines or tiled stoves, which were then covered with various types and colours of glazes of significant artistic value. In the nineteenth century, there were more than 15 manufactures in the town, producing outstanding and beautiful Bolesławiec pottery. The method of decorating the manufactured items became particularly famous: distinctive patterns of twigs, birds, flowers or other graphic signs were applied to the dishes by hand with special stamps. In this way, a completely new technique of decorating was born - the so-called stamp technique.

Nowadays, the more than 700-year old traditional decoration process of Bolesławiec ceramics has certainly undergone a huge revolution, but as far as the design itself is concerned, today's potters remain loyal to tradition and are still drawing inspiration from the beautiful local patterns of the past.